Finding out you’re going to be a father is a huge milestone
and your mind immediately begins to race as you think of your new “To Do List.”
First up after telling friends and family is deciding where the baby’s room
will be.  Some families already have a spare room which can be easily converted and should consider themselves lucky! If you are like my wife and I, your home may be a little short on space.

We purchased our home in 2006 and at the time a two bedroom
house with a full bar room instead of a third bedroom seemed like a great idea.
Once we found out we were expecting our first child, we knew we would have to
build an addition because the bar room was here to stay! Once we agreed on how
the addition would look, the next step was clearing the land and carving out
the area with a backhoe.  There’s nothing like drinking a beer and trying to break through rocks and massive tree limbs to make you feel manly (Insert Tim the Tool Man style grunt here!).

In a perfect world, after the land is cleared and prepared, a concrete slab would be poured, framing would go up followed by drywall, paint, etc. In our case, very hectic work schedules meant the addition was majorly delayed. In an effort to save money I had decided to build the addition with my father’s help.  He is a carpenter
with many years of experience in home-building and was wise enough to tell me
to hire out certain jobs that were beyond our capability.

I don’t personally understand the “nesting” period that women go through during the pregnancy, but I do know that a compromise would need to occur in order to keep my wife, Gina, happy.  It’s no surprise that she wasn’t thrilled when I told her the addition would have to wait. We decided to turn the guest bedroom into the nursery.  We debated removing the guest bed from the room, but decided to keep it for company and to make late night breastfeeding easier for her. It wasn’t the ideal baby room
that Gina wanted, but I can guarantee Jackson doesn’t know the difference! 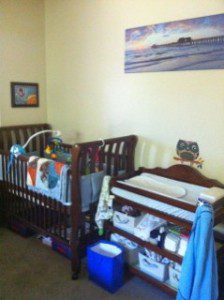 Our plans for the addition are on hold until my work life settles down. One positive is that we’ve made some changes to the layout of the addition to maximize space and make it look exactly as we envisioned.

In short, deciding on where to put the nursery takes compromise, time, money and
patience! If you can remember to stay grounded and communicate with your spouse
or significant other you will hopefully have a great memory of making the
nursery come together.

If I had a hammer…I’d hammer in the morning! 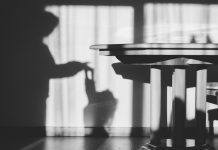 Father’s Day without a Father 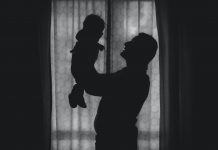 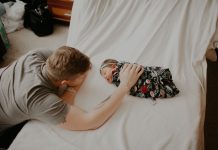 Why I’m Spoiling My Husband This Father’s Day