Yesterday Allison shared her story on how she became an unwed mommy and today, it’s my turn. I was brought up to believe that things happen for a reason and this situation is no different. Yes, I believe I was put on this earth to be Caroline’s mom but looking back, if Matt and I had not gotten pregnant, Allison and I wouldn’t have been pregnant together and our relationship would not have grown into what it is today (we literally spoke EVERY DAY that she was pregnant [once it was FB official] EVERY DAY!) and had that not happened, we wouldn’t have a blog together and had that not happened, we wouldn’t be able to use this as a way to share our stories and be a pillar of support for those who may be going through the same thing. So here she goes….but first, a cute picture of Caroline! 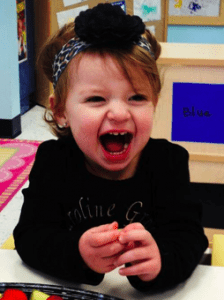 Matt and I had not been dating very long when we made the decision to move in together. I had been engaged before and he had been in a serious relationship before and we just knew that we were meant to be. I was on birth control at the time, religiously taking the pill. Shortly after our decision to move in together, we took a little vacation to Michigan to celebrate Matt’s 29th birthday. I forgot my pill pack. I didn’t think it was that big of a deal because it was three days and we’d be home and I could take the two that I missed and continue on. Well, everyone knows what we women have to give our men on their birthdays, so to keep this PC…we “celebrated” his birthday. We got home, I took two pills like I planned and moved on with my life. I was preparing for a large event, was stressed to the max and was coincidentally a day late. I wasn’t sure if it was just stress or if we made a birthday baby, but because I needed to keep my head on straight for work, I just didn’t think about it. It wasn’t until two days later and once the event was behind me that I began to consider all scenarios. I confided in my dear friend, Hope, and we went to CVS during our lunch break and bought seven pregnancy tests. I took all seven (while I was at work!) and they were all positive. Hope was thrilled–in fact, that’s an understatement…she did the happy dance in our front offices– and I was shocked but calm. At this point, Matt didn’t have any idea. I sent him a text message late in the day that said I needed to talk to him when he got home, he called immediately and I blew it off. I had a babysitting job that evening, so I wasn’t exactly sure how to approach the situation in the 5 minutes we had together but this is what I did.

(Matt walks through the apartment door)

We texted once the kids I was sitting were asleep and when we got home we had a lengthy discussion. We, like everyone going through the same situation, had three different options: abortion, adoption or having the baby. Abortion was out of the question–Matt and I were in a serious relationship, the baby was conceived in love, I had a great job, Matt had a great job and we understood the consequences to our love making. We were both insured and we would be capable of providing everything and more than our unborn baby would need. Adoption was out of the question–in fact we didn’t even consider it. Having the baby–obviously what we decided for the reasons listed as to why we didn’t choose an abortion. We told our families the news and kept it to ourselves for the 12 weeks doctors recommend. Matt and I had a candid discussion about not forcing ourselves into a marriage and that when the time came to get married, we would get married. We knew we wanted to be together, we made that decision long before Baby Barry, and I didn’t want to be a pregnant bride. Fortunately, everyone respected our feelings on that.

Nine months later, we delivered a beautiful baby girl and she has brought us all of the joy in the world. Matt planned to propose on July 8, but because we went into labor early and were in the hospital on July 8, he had to hold off until July 18! He took me to took the baseball suite where we first met, coordinated with the announcer to have our song playing in the background and it was beautiful. I will never forget…I almost didn’t get out of the car to go to my own proposal because I was pumping milk for our baby! Hilarious! We were married in April and to be honest, we don’t feel one bit of a difference. We were a family before the documents were signed and the expensive party and we’ll be a family as long as we are all happy! Is getting married before starting a family ideal? I’m not sure. I think being with someone you love, being committed to your budding family, having support, being financially fit to care for a baby (they’re pricey little boogers!) and being mentally prepared for your life change is all you need .

1.) What were some of the challenges you faced being an unwed mother (if any)? I’m honestly having a hard time answering this question. I don’t think we faced any challenges. Obviously relaying the message to our families was tough because regardless of how progressive your family may be, it’s not the expected order of events.

2.) Did you have to deal with any negative opinions? If so, how did you handle that? Yes. It’s no secret that I used to do pageants (not sure where along the way my body forgot that, but whatever!) Well, there are two people who own and operate a pretty popular pageant site in Texas. When I announced that I was pregnant (on Facebook of course) I was flooded with sweet words and congratulations. I was also flooded with FB messages. One came from one of the owners of that web site and said, “HEY!! I didn’t know you got married!” and I said, “I didn’t, [name]…you know that…” and they continued on and on about how embarrassed I should be and how young girls looked up to me and now what are they going to think and yada yada yada. I was appalled. Not only was this someone I hadn’t heard from in nearly 5 years, but truthfully, I was pretty far removed from the pageant loop and couldn’t believe they would throw that in my face. And to answer the second part of that question, I didn’t handle it well and was pretty emotional about it (of course) and immediately deleted [name] from Facebook. If only there was a “slap” feature identical to the “poke” feature, I would have had a better day!

4.) Now that you’re married, do you think being pregnant with baby #2 will be any different? Nope. In fact, our married life is more dysfunctional than our single and sinful life was. Our address is in Austin but I work in Dallas. We don’t have an end date on this working/living situation (just yet) so being pregnant right now would be worse!

5.) What would be your advice for a young woman in the same situation you found yourself in? The most important thing right now is your health and the health of your baby. Surround yourself with people that love you and you will make it through okay.

6.) What do you think is the single most important thing to keep in mind when preparing for a baby out of wedlock? I think the health of the relationship is far more important than a marital status. I know a lot of unhappy married people and bringing a baby into that world is far worse than what Matt and I did. That and love and support from family.

What order did you go in? Love, Marriage, Baby or Sex, Baby or Love, Baby, Marriage, the list goes on! All we know and believe is that babies are joyous gifts regardless of the order!!! 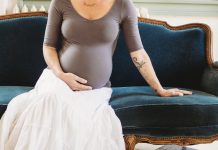 Pregnancy + Smart Devices… What To Know To Protect Your Baby 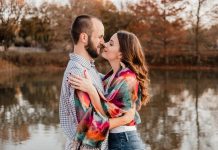