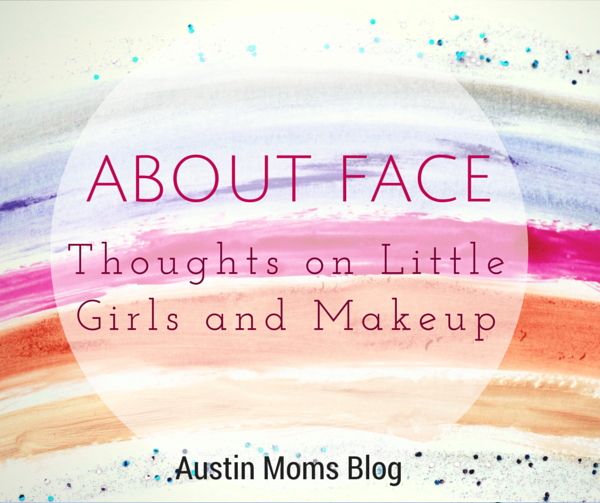 So which is it? Born with it or not, there are very strong cultural and societal expectations that women be aesthetically appealing. At ALL times. Let’s face it, ladies, we are caught in some kind of judgy pressure cooker fueled by those aforementioned expectations. Most cosmetic companies, naturally, pander to these notions by marketing to us with the promise of better, more beautiful, absolutely ‘natural-looking’ results. Can anyone explain ‘natural-looking’ anyway?

By highlighting the broad idea that wearing makeup is often times an expected behavior of women, the assumption is the rule applies to grown women. The topic of makeup takes on a whole other meaning when discussing little girls. When your five-year-old comes to you and wants to wear mommy’s makeup, what is your response?

I am a mom to two children, my oldest being an almost-7-year-old girl. She has definitely taken note that I wear makeup on an almost daily basis and she sometimes asks if she can paint her face with my “eye shade”. You know what? I let her. And sometimes when that “eye shade” is used to make an absurdly large cross tattoo on her upper arm, a la Kat Von D, I let her do that too. We are big on self-expression in our house and while dabbling in cosmetic artistry isn’t our most refined fine arts activity, it’s a way my daughter can express herself.

Now before I gladly accept my award for being ‘Laid Back Parent of the Year’ I must say that I’m cool with occasional makeup at home. If we’re talking about wearing makeup outside of the house then I’m afraid my award will be handily revoked. Currently I don’t see a need for my girl to leave the house looking like Tammy Faye Baker. A little bit of chapstick or lip gloss won’t hurt anyone, but anything beyond that feels unnecessary. When it comes to speeding up the clock of life, a fan I am not (unless you’re talking about teething, potty training, the three-nage year…ahem, I digress). My hope is to keep my daughter’s youth and innocence encapsulated for as long as possible. It might be a naive and lofty goal, but I feel that she is owed that from us as parents.

In addition to my concern about my daughter’s innocence, I also want to prevent adding to the sexualization of young girls. This topic is a worm hole that we could get lost in forever, but the general idea is that the older a girl looks, the older she will be perceived and treated by others. Misguided perceptions can potentially lead to judgements, to bullying, to feelings of better than or, more likely, not enough. Honestly speaking, we aren’t looking to add to our monthly therapy bill at this point in time (mama is doing quite a good job racking that up on her own).

We’ll continue on with our occasional makeup at home because, to me at least, it feels organic and not taboo. I think of it in the same category as the bin of dress-up clothes that my kids drag out every few days. But that also means we won’t be dressing up as a veterinarian ballerina in full makeup when we run out to the grocery store. Reflecting on my own thoughts about this parenting issue has also led me to the conclusion that the next time my daughter tells me that I “look beautiful without makeup,” I will not roll my not-yet-done eyes. I’ll say thank you and put the mascara down.

So tell us, what are your thoughts about having a young daughter who is interested in makeup? 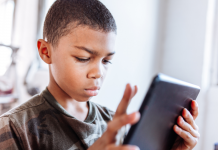 I thought I was prepared for this virtual learning thing