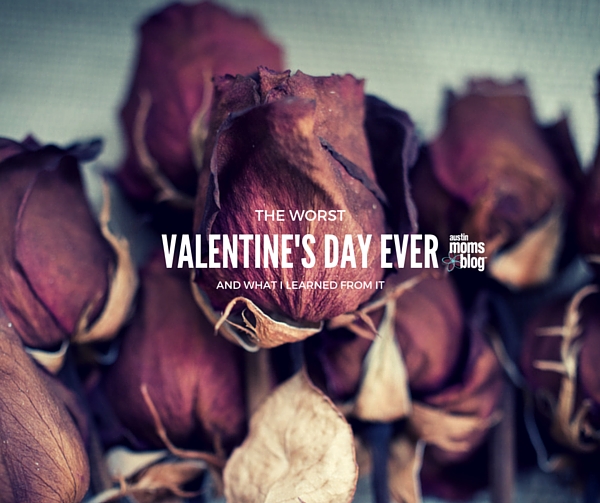 Finally, I’d REALLY like your help settling a more than decade-long argument with my husband.

So let’s get started.

Allow me to take you back in time. The year is 2004. February of 2004, to be exact. I am a newlywed. A blushing bride, betrothed to my beloved for only six months. The newlywed phase is what we are in, and romance is at an all-time high. My very first Valentine’s Day as a married woman is approaching, and my little heart is all a-flutter, just envisioning all the ways my man is going to sweep my off my feet. (Never mind the fact that we have been together since we were 16, and although his strengths are many, “Casanova”  is not exactly his nickname. This doesn’t matter. I’m not living in reality-land at this point. I’m living in la-la land).

Actually, I’m living in Dallas, and I am very homesick for my family back in Austin. So, when my mom and dad tell me they are planning a trip to Dallas for Valentine’s weekend, my husband and I decide we will celebrate Valentines earlier in the week, in order to be able to spend the weekend with them. No problem. I’m ok being swept off my feet on Wednesday, versus Saturday. I’m nothing if not flexible.

Wednesday comes. It’s our “Valentine’s Day”. We decide we will go out for a “fancy dinner” somewhere. Keep in mind, we are 22 years old. We are children! I’m still finishing up school. We are poor. We eat hamburger helper a lot. A “fancy dinner” has the potential to sweep me off my feet. If he plays his cards right.

Alas, we both get off work later than planned that day, we are STARVING, neither of us feels like getting dressed up, and the fact of the matter is, Chuy’s sounds freaking delicious. So in a moment of creamy-jalapeno fueled weakness, I lower my romance bar (a lot) and agree to Valentine’s dinner at Chuy’s. We go. We drink creamy jalapeno with straws. We have fun. We go home. “Valentine’s Day” is over. In my husband’s mind.

I know we SAID that that was our Valentine’s Day, but of COURSE it isn’t. And he surely must know that, too.

The next day, I get a call from my parents. They aren’t coming to visit us anymore this weekend. No real explanation is provided. But I know the explanation.The EXPLANATION, of course, is that Casanova is taking me away somewhere for the weekend. Way to step up your game, babe. Make me THINK enchiladas and greasy chips are all that’s in store for me, when REALLY we’re boarding a plane Saturday morning! Love it.

Saturday morning comes. The REAL Valentine’s Day. Forget all that Chuy’s crap. Let’s get on with the excitement and romance of TODAY. So we wake up. I wriggle my way out of our snuggle, open my nightstand drawer, and present him with his card and gift. I mean, it’s not much, compared to the plane tickets he is about to reveal to me, but at least I thought to get him his favorite candy, and write a sweet card. So I present that to him, and he presents me with…..a blank stare. Actually, more like a terrified stare. “I…uh…..thought that we….uh…..kind of already did Valentine’s Day on Wednesday.” Ha! Puh-leeze. Maybe if he’d had a card. A single rose. SOMETHING. Maybe then I would have accepted reality…and realized that no grand gesture was in store for me that day. But the fact that there was NOTHING….well, no husband would be that dense. Therefore,  my original theory must be true, and he must have something up his sleeve.

And that is the theory…the assumption..that I operated under all the way until about noon that day…when my husband’s college roommate showed up at our front door to shoot hoops with him, or some such nonsense. So as not to be too wordy, I will sum up the rest of the day in bullet point format:

I’m super curious to hear who YOU agree with (care to comment below?), but first (and in all seriousness) a few lessons my girlish self learned that day, that I’ve carried with me ever since:

Alright. Hope you’ve enjoyed my tale of sorrow.  Now….settle the score for us, and comment below!