’Oh my gosh, look at us representing”

These words were spoken affectionately on a world wrestling stage between sisters- not bound by blood, yet still predesigned to share a sisterhood by their two most identifiable traits; being black and being women. Simply being there together, history was being made.

Tamyra Mensah-Stock of Houston, Texas stepped onto the mat this week to compete against fellow champion Blessing Oborududu of Nigeria to compete in the Olympic Finals in Tokyo. They both had dominated in their respective climbs to this match and although they surely each believed that they were capable of coming out quite literally on top, it was Tamyra who won the Gold for the USA! That’s not the best part of this victory though. You see if you consider that the Olympics as we know it date back to the 1800’s, that women’s sports phased in slowly starting in the 1900’s and that Women’s Wrestling- Freestyle was added as a permissible event less than 20 years ago, this win becomes even bigger. Tamyra is only the 2nd woman to win this event for the USA (previously won by Helen Maroulis in 2016) and now she is the very 1st African-American woman to do so! Just this past year, I shared vulnerably with my friends the significance of “firsts” for black americans as far as history goes and the bittersweet blend of joy and sorrow as we continue to navigate our ways into spaces we weren’t initially accepted. All joy celebrating that at 28 yrs old, Tamyra didn’t have to struggle to be seen and that she pinned down a victory that she is undeniably passionate about using to fuel those who will come after her to see themselves.

“These young women are going to see themselves in a number of ways and they’re gonna look up there and go, I can do that ’cause I can see myself,” Mensah-Stock said.

One of the things that I love most about the Olympics is that I think it gives citizens of every nation an innate sense of pride, like at my house we really sit around rooting for a forward pike 3.5 somersault dive and 20 other sports we would never otherwise watch, but here we are fully invested for two and half weeks cheering on any and every one representing for the U.S.A! You hear athletes proclaim how honored they are to be chosen to compete at this level all the time but just watching the live interview of the newly crowned champion, you could SEE how excited she really was to be there. You know how our little ones can get sometimes with their favorite blanket draped around them and just holding it so tight to their face as if they’re trying to communicate an intangible message to this very tangible and often tattered item? That was Tamyra with the American flag that was draped around her neck during the post-interview, just truly and unashamedly enamored of her country. You know I like to say Texans are a little more proud anyway but if I’m being honest, I’ve never seen anything like it- I’ve never seen a champion quite like her, so transparent- so whole.

‘It feels amazing’ she exclaimed. ‘I love representing the US, I freaking love living there. I love it and I’m so happy I get to represent USA. Love it.’

There’s honestly so much to love about this story, about this young woman but here are some things I just don’t want anyone to miss and that I am making a point to reflect on and to share with my teen daughters.

A MAMA’S THOUGHTS ON  HOW TO BE LIKE TAMYRA MENSAH STOCK:

In a span of 4.5 minute interview Tamyra cried tears of joy, laughed uncontrollably, tears of mourning, squealed with child-like joy and sang a little bit of the Carrie Underwood tune, “Champion”! On a platform where she could force herself to be “professional” and “reserved”- she chooses to be vulnerable and authentic.

Don’t Put Yourself in a Box: Push Beyond the Tough Stuff

As a High School Sophomore, Tamyra was a track and field athlete but was being bullied and at the behest of her twin sister, reluctantly joined the wrestling team. She was a self-proclaimed “germaphobe” and hated to be touched as the sport requires- let alone sweated on. Things were just not going her way and she was certain she couldn’t do this well, just when she was ready to quit, she won her first match…against a state qualifier! This lit a fire in her that ran through her whole family especially her father who was the sisters’ biggest supporters. Her father passed away tragically and although in grief, she wanted to quit, she decided to honor his memory with her commitment to see his dream for her come true to take wrestling as far as she can. She took that dream to College on a full athletic scholarship and now to the Olympics and in the history books!

Be Faithful on the Journey. Stay Humble when you get there.

Tamyra shares about how she’s always praying as she trains, as she rests, as she prepares for matches. She even sings worship songs up until her final steps onto the mat- believing that she gets her confidence from God. An Interviewer praised her for dominating the way she did (she beasted) and asked if she was “surprised by the outcome”? She bounced and then moaned inaudibly, either in awe of God or overwhelmed by the realization of the way things had unfolded, and then she replied “Of course… it’s by the grace of God I’m even able to move my feet!”, “I just leave it in his hands”.

So a big Congratulations to the First Black US Olympic Gold Medalist in Women’s Wrestling, Mrs. Tamyra Mensah-Stock on her accomplishments and for everything that she will undoubtedly achieve in the future! May we all be inspired to let our lights shine from whatever hills we climb not merely for our glory but to help write the next person’s story.

Representation Matters- it’s where our dreams are born. History matters- it’s where our dreams are validated. Tamyra is using her greatest aspirations to BE an inspiration. So for every one who needed this She-ro; every girl, or brown-skinned, or big grinned, every silly, sweet or caring, every corrective-lense wearing, every tough, every stocky, every afro-puff rocking… this one is for YOU. Tamyra is our Champion. 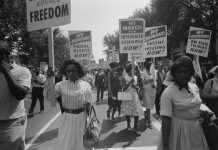 Do You Know the Origin of Black History Month? 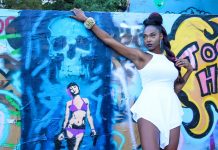 5 Things Every Austinite Should Know About Black History 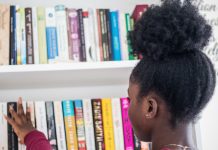