|Recurring Event (See all)
Sundays at 3 PM; no show Monday 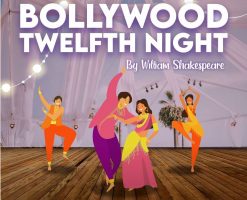 One of Shakespeare’s most popular plays, Bollywood Twelfth Night will feature dances by Prakash Mohandas and songs by Austin singer/songwriter Nagavalli. Manali Sunkara will play Viola, a young woman disguised as the boy servant Cesario in the fantastical world of Illyia. Viola falls head over heels in love with her boss, Duke Orsino, played by New York guest artist Tamil Periasamy. Orsino sends Viola, on his behalf, to woo Olivia, the woman he loves – played by Michelle Jackson. Twelfth Night is also beloved for the comic subplot that revolves around the super-serious servant Malvolio who is tricked into wearing yellow stockings to also woo his boss, Olivia. Ben Wolfe will return to Austin Shakespeare as the manic Malvolio. Other company members include Ev Lunning as the ever-drinking Sir Toby Belch; Max Green as the bumbling suitor Sir Andrew Aguecheek; Chuck Winkler as the heartfelt friend Antonio; and Srini Raghavan as the comic Fabian, as well as the Sea Captain. New to the company are Natalie Crane as Maria, Meredith O’Brien as Feste the clown, and Josh Kok as Sebastian.

Long Center for the Performing Arts