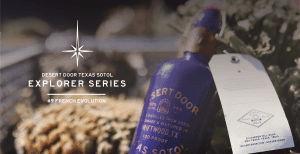 Armagnac is a distinctive brandy produced in the Armagnac region in Gascony, southwest France. Armagnac is a true craft spirit, made by smaller-scale, family-owned distilleries. We finished our Oak-Aged Texas Sotol in a 20-year-old Armagnac barrel. This release features a wonderfully complex nose of plum and vanilla leading to flavors of apricot and caramel on the tongue. This evolution of our Oak-Aged Texas Sotol is one you won’t want to miss.

Visit our distillery starting September 22 for the Explorer Series release weekend, and sample French Evolution along with our other staples. Try it in a cocktail as our mixologists craft the bartender’s choice – a masterfully crafted cocktail that will showcase this rendez-vous between our Texas Sotol and French Armagnac.

You can pick up this exclusive iteration of our Texas Sotol at the distillery, and as always, this is a very limited release, so when it’s gone…well, you know!

RSVP to let us know you’re coming, and to enter to win a French Evolution Explorer Series Kit. We’ll announce the winner on September 22!

At Desert Door, we’re explorers at heart. Recently, we’ve been exploring new possibilities – from partnering with local makers, to sourcing unique barrels and ingredients. We’ve created some great variants, which we’ll be releasing in limited quantities through our tasting room over the coming year.