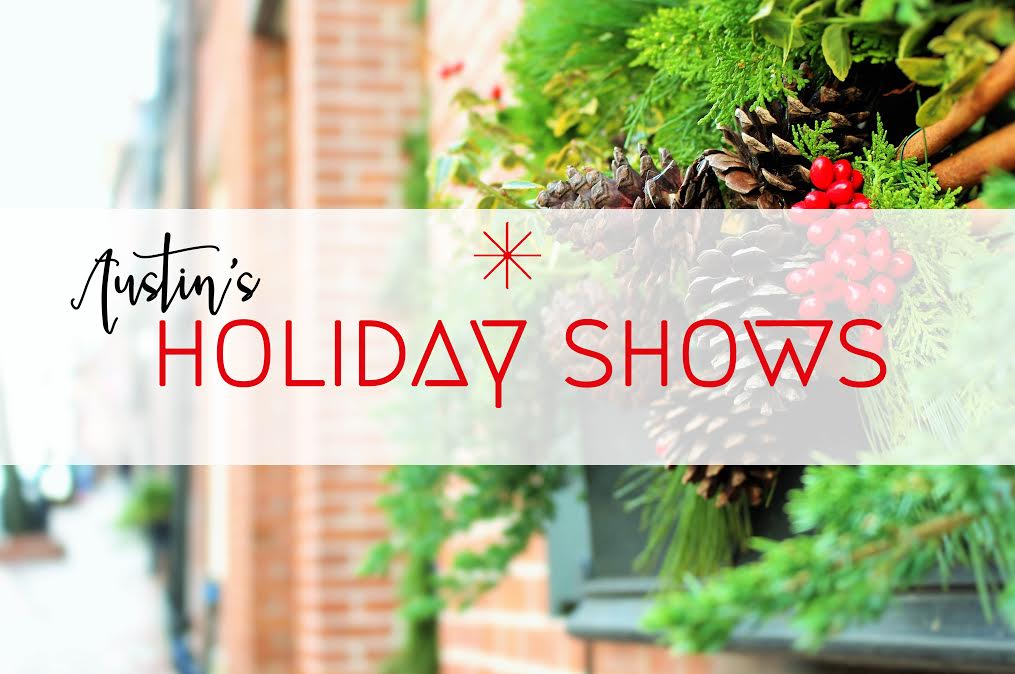 Who doesn’t love dressing up in holiday dresses and heading out on the town for dinner and a show? We have an incredible list of holiday shows all over our beautiful Austin! Check out our list below and plan your holiday!

Sit back and enjoy this very special evening and the very first Albright Family Christmas Tour! It will be filled with your favorite songs of the season, enhanced with a very unique twist! This heavily anticipated tour includes an A-Team of musicians to enhance the enjoyment factor.

Your favorite seasonal songs done with an Albright Family twist will fill the evening. The night will get merrier with the top-tier musicians joining the family on tour.

Join the Austin Chamber Music Center for a live concert of all of your favorite tunes from the holiday classic! Celebrate the season with the original Charlie Brown music of Vince Guaraldi featuring pianist Michelle Schumann, bassist Utah Hamrick, drummer Scott Laningham, and special guests—plus, the chance to meet Snoopy in the lobby! Bring your family to this Austin tradition and get in the holiday spirit!

Austin’s most rockin’ holiday tradition returns to make merry with a new music to get the party started! ZACH’s inspired adaptation of the Dickens’ classic is a musical sleigh ride through rhythm and time, infusing the traditional Victorian story with a musical score that spans all genres and eras. Motown meets the HoHoHolidays in this family celebration, creating an infectious spirit that has everyone dancing in the aisles. Join the loving Cratchit family and three soulful ghosts as they take Ebenezer Scrooge on a joyride to miraculous transformation, as he rediscovers his heart and love for human kindness.

School’s out for the holidays, but Timmy Cratchit is stuck at Scrooge’s Plastic Emporium where his mom labors overtime on a last-minute deadline. Tim and his cousins work on a school project while Mr. Scrooge eavesdrops and learns about the serious environmental problems caused by the plastics his company produces.

This new family musical combines the suspense and tradition of the beloved Dickens tale with new hope for the future. All ages will groove to Laura Freeman’s original live music, dance, puppets, and more! Who knows? It may even snow!

This holiday, enjoy a cult classic at The Palace!

Ralphie Parker only wants one thing for Christmas: A Red Ryder BB gun. Despite pleading his case to his mother, teacher, and even Santa Claus himself, he gets the same response: “You’ll shoot your eye out!” When the big day arrives he gets lots of present under the tree including a lovely gift from his aunt that his mother just adores. But what about the BB gun?

Based on the 1983 movie, join us for a fun-filled night where you’ll laugh yourself right out of your seat!

“A Cool Yule,” the TexARTS holiday tradition, returns for its seventh year! This swingin’ cabaret will warm your heart with the songs of Andy Williams, Elvis, Frank Sinatra, Sugarland, Michael Buble, Peggy Lee and more!

A Drag Queen Christmas – The Naughty Tour. It’s a magical (and hilarious) evening of holiday performances featuring contestants from the reality television show on VH1. Here come the queens in their biggest holiday costumes with back-up dancers and a full stage production. All ages welcome. Warning – adult content (because they’re drag queens).

How is Christmas celebrated in the southwest? With traditional carols played by a mariachi of course! And this December Mariachi Sol de Mexico®, with the blazing sounds of its 13 piece ensemble, brings to life a festive, joyous holiday celebration. Enjoy a fusion of the traditional holiday spirit with the color, and the traditions, of Mexican and American Christmas songs and carols.The traditions are brought to life by Sol de Mexico’s spectacular artistic execution. Experience this unique fiesta of favorite holiday tunes from both sides of the border.

Join Texas Early Music Project for its annual multilicious feast of Christmas music through the ages. With sweet medieval lullabies and joyous English and French carols, magnificent motets from Germany, dulcet Celtic cradle-songs and exuberant folk-tunes, and more, we celebrate this season of expectation and rebirth, along with different cultures encompassing more than 700 years of humanity’s hope, love, and joy.  TEMP puts its distinctive stamp on the intangible essence and passion of Christmas with arrangements for solo voices, small chorus, harps, violin, flute, mandolin, viols, and lute.

Christmas in the Community

The Austin Symphony is once again bringing free music to all Austinites this holiday season. “Christmas in the Community” is a series of concerts held throughout the city of Austin featuring different ensembles of the orchestra playing familiar holiday music. The program kicks off on December 1st at the Macy’s at Barton Creek Mall and concludes December 20th with big band music by members of the orchestra at Central Public Library. All dates, times, and locations are listed below.

Dashing Through The Snow

Four days before Christmas, Trina, the innkeeper of the Snowflake Inn, has her hands full with a group of eccentric guests that deck the halls with holiday hilarity. Hoyt and his sister Donna Jo attempt to end a thirty-year family feud. Ainsley and Lenora, actors from a lower-than-low budget of A Christmas Carol try to fulfill a promise, but instead leave a wake of comedic chaos, and Mrs. Claus has an ill-advised romance with one of Santa’s elves.

You’ll swear this family-friendly Christmas comedy is more fun than a joyride in a one-horse open sleigh!

Based on the cherished New Line Cinema hit, Elf JR. features songs by Tony Award-nominees, Matthew Sklar and Chad Beguelin, with a book by Tony Award-winners, Thomas Meehan and Bob Martin. Buddy, a young orphan, mistakenly crawls into Santa’s bag of gifts and is transported to the North Pole. The would-be elf is raised, unaware that he is actually a human, until his enormous size and poor toy-making abilities cause him to face the truth. With Santa’s permission, Buddy embarks on a journey to New York City to find his birth father and discover his true identity. Faced with the harsh reality that his father is on the naughty list and that his half-brother doesn’t even believe in Santa, Buddy is determined to win over his new family and help New York remember the true meaning of Christmas.

Join your Austin Symphony, accompanied by Chorus Austin, for our annual Christmas tradition of Handel’s Messiah. This night of musical magic will comfort you through its familiarity and fill you with the joy of rediscovery. With performances being held at Hyde Park Baptist Church and at its additional location, Emmaus Catholic Church, let the Austin Symphony begin your winter celebrations with a performance full of rejoicing!

Due to demand, the original Holiday Heroes returns with some new songs and surprises! In this hilariously fun holiday sing-along, students get into the holiday spirit with Ernie and Rufus. Celebrate the season with singing, laughter, and holiday cheer for all.

Il Divo has always stood out for its peculiar mix of opera and pop in songs of different genres, and is the most important reference in the world of the crossover groups of classical music. Since its debut in 2004, IL Divo has triumphed on the most important venues around the world, and has sold over 30 million records throughout its career.

Along with all our Christmas favorites, Norman joins Bobby on “What You Won’t Do For Love”, and Bobby and Marion on Norman’s “That’s The Way Love Goes”.

So please, join Norman, Bobby and Marion for a Christmas show to remember.

Make your list and check it twice! This holiday concert is more than just nice!! A Peter White Christmas with Euge Groove, Lindsey Webster, and Vincent Ingala is coming to town. Contemporary jazz lovers eagerly await this annual fun filled concert, which has packed fans into halls coast to coast year after year.

Lone Star State luminary Robert Earl Keen will once again hit the road this holiday season for his annual Christmas tour. This Holiday show is sure to include REK’s classic, “Merry Christmas From the Family,” and many more out-of-this-world tunes.

2019 has arguably been the biggest year yet for Sam, Casey and Adam.  The guys put out their new album “Orion” in April and have been on the road ever since.  You know them from such smash singles at “Renegades” and “Unsteady”, and their new single “Hold You Down” is sure to be another fan favorite for years to come.  These central New Yorkers are thrilled to be back in Texas for Merry Mix Show 2019!

Walk Off The Earth

At first glance, there’s a chance you might not recognize the name Walk Off The Earth.  However, there’s a good chance you’re already a fan of their work.  Their YouTube covers of popular songs such as Gotye’s “Somebody That I Used To Know” and Lil’ Nas X’s “Old Town Road” have literally been viewed hundreds of millions of times over the years.  This Canadian band also began working on their own original music years ago, even winning an award for Canada’s best group.  Their new single “I’ll Be There” gives us just a glimpse into what’s next for them.  See it all for yourself at Merry Mix Show 2019!

Dean Lewis will be the first to tell you how his world has been turned upside-down in the past few years.  Less than four years ago, he was in search of a way to get his music to the masses.  A songwriting deal followed, but Dean wanted more control…namely, he wanted to sing his songs himself.  He finally got his big break and he didn’t disappoint.  The powerful breakup anthem “Be Alright” became a worldwide sensation, starting in his native Australia before hitting number one in the United States with over 84 million YouTube views!  Dean spent the summer touring the country and is back in Austin to celebrate the holidays with you for Merry Mix Show 2019!

Start your holiday celebrations with a scrumptious trip to the Court of Sweets and Ballet Austin’s spectacular annual production of The Nutcracker! From its vibrant sets and costumes to the impressive cast of more than 200 dancers, this colorful winter classic brings families and friends together every year to enjoy the world’s best-known ballet. Make The Nutcracker your annual holiday tradition and share this memorable experience with those you love!

David Sedaris’ ever-irreverent and cynical Crumpet is baaaack! The outlandish tale of a Macy’s elf merrily jingles to life in the intimate Whisenhunt at ZACH Theatre. In this holiday cult-classic, Crumpet sarcastically expounds on the talent it takes to juggle tinsel, tearful tots, and not-so-sober Santas during what is hailed as the most wonderful time of the year. 75 minutes of rollicking (and not so politically-correct) fun, this laugh-‘til-you-spill-your-cocktail evening will delight adult elves who like it more naughty than nice!