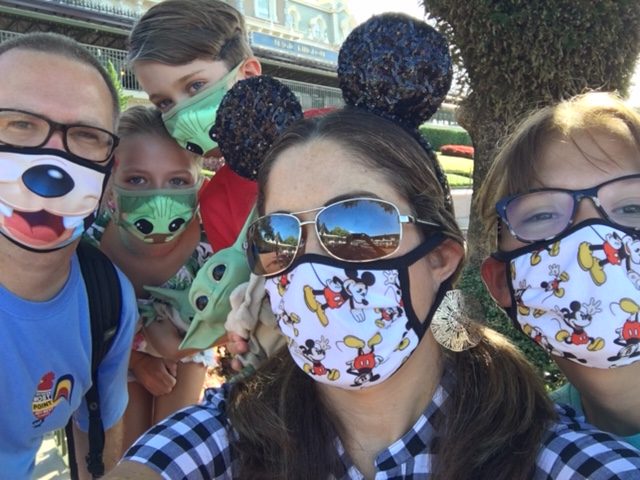 I have long been a fan of Disney World, and, as soon as they were old enough, my husband and I brought each of our children to Florida to be indoctrinated into all things magic and Mouse. Yet, I was firmly in the – “What?!? Only an insane person would go to Disney World during a pandemic!! – camp.

Surprising then, and a story for another time as to how, that we found ourselves at Disney World this July in the middle of a pandemic. We spent two glorious days in the Magic Kingdom and Animal Kingdom parks, and, with no lines, not a crowd in site, robust security measures, and that special Disney customer service, we felt like we had cracked some code to the good life.

If “The Happiest Place on Earth” is in your future, here are some things you may want to know about Disney:

Before purchasing your ticket, you’ll need to go on Disney’s park website to ensure that the Magic Kingdom or park of your choice has availability. Once you’ve confirmed that it does, you’ll purchase your tickets, then quickly return to the park reservation pass page to reserve your passes into the park. This is Disney’s system for ensuring that attendance is kept at desired levels within each of the parks.You can link your tickets to your park reservation pass so that entrance to the park is seamless.

We planned to get to the park early, not knowing how long the new entrance procedures might take due to the pandemic. We needn’t have worried. The parking lot held a few rows of cars, followed by seemingly endless amounts of empty asphalt.

The ride over on the Monorail was equally different, yet not unwelcome. Used to being crammed in with several other excited families, we were the only family allowed into our car – after sanitizing, that is. It looked like couples were being paired up in the same car, but by sitting on the benches, you are definitely maintaining proper distancing. 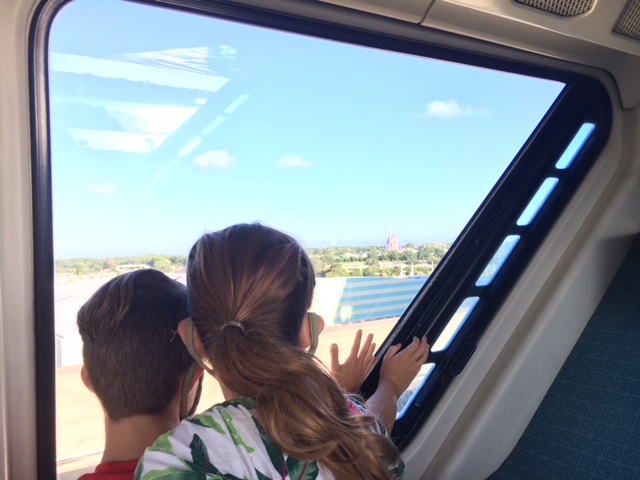 When you get to one of the parks, be prepared to have your temperature taken and your bags checked as part of the pandemic protocol. You will need to open and display the contents of your bag yourself, as Disney employees keep contact to a minimum. 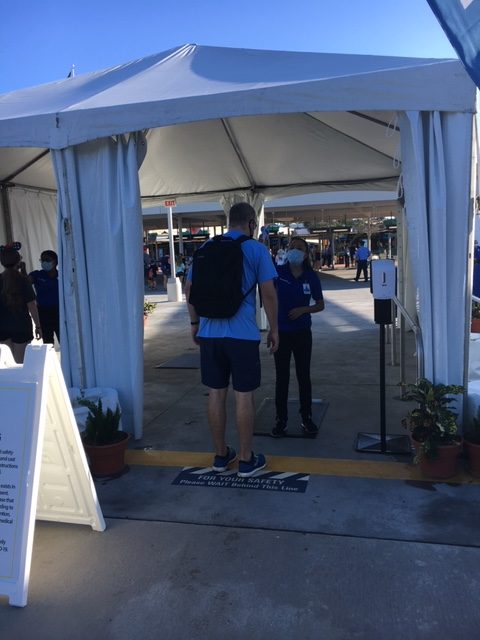 Visitors to the Magic Kingdom usually congregate in front of the train station until the gates are officially opened. However, the parks have switched to a soft opening to keep crowds from forming. We arrived before the official opening of 9 a.m., and by 8:40 a.m. were making our way up Main Street. 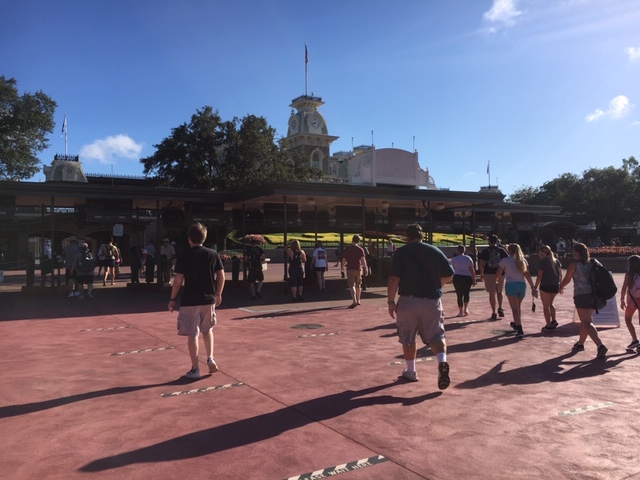 “Making our way” was not the crush and rush of visits past. In fact, it was the first time we’d been able to see much of the ground on Main Street at all. There were huge pockets of emptiness, and we giddily looked at each other to check that this was, in fact, true. 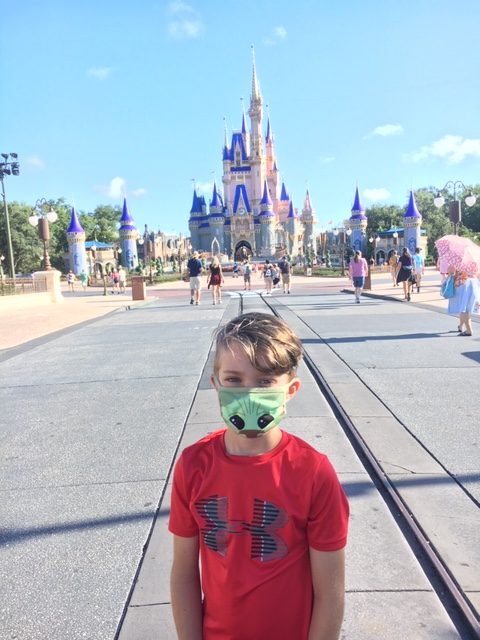 We moved through the various lands – Fantasyland, Tomorrowland, Adventureland, Frontierland, and Liberty Square with the same ease with which we walked up Main Street.

With literally no lines to wait in, wearing a mask in the heat was extremely bearable. By the time we started to feel warm, we were under cover. Although still technically outside while walking through the twists and turns designed to keep massive crowds organized, we were cooled by the blasting air that Disney uses to keep people reasonably comfortable.

Ninety-nine percent of the time the lack of crowds, strollers, and long lines was incredible. The other one percent, our filter would imperceptibly shift, and either my husband or I would be struck by just how strange and surely wrong the world must be for this experience to be true. I stopped to take a picture when I saw that the wait time at Space Mountain was listed as zero minutes. Another guest paused, shook his head in understanding, and said, “I know. It’s so weird, right?” 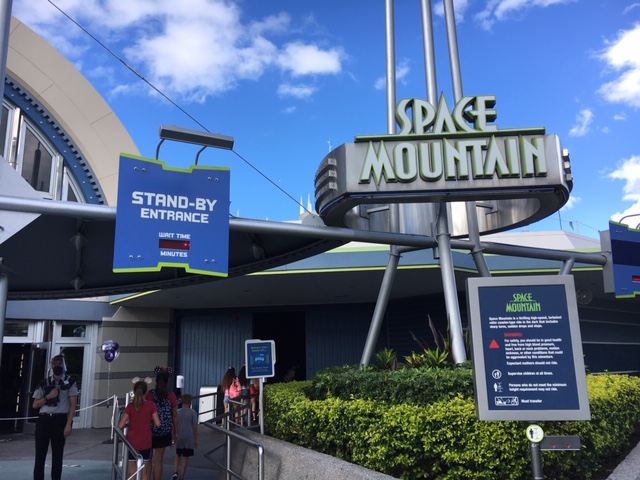 When we visited, the Magic Kingdom was open from 9 a.m. – 7 p.m., which meant no fireworks. Because we kept moving constantly all day due to the lack of lines, we didn’t mind the earlier closing time. In true Disney World fashion, by the end of the day, our feet were still killing us.

In an effort to prevent crowds from gathering, there were also no parades, but floats would randomly appear. Having been before, though, and being so delighted to breeze through all of the “lines,” we were happy to trade the full parade away. Also missing were character meet-and-greets and autograph signing. There, again, Disney had a solution. Characters would appear – socially distanced – at unscheduled times to interact with guests. 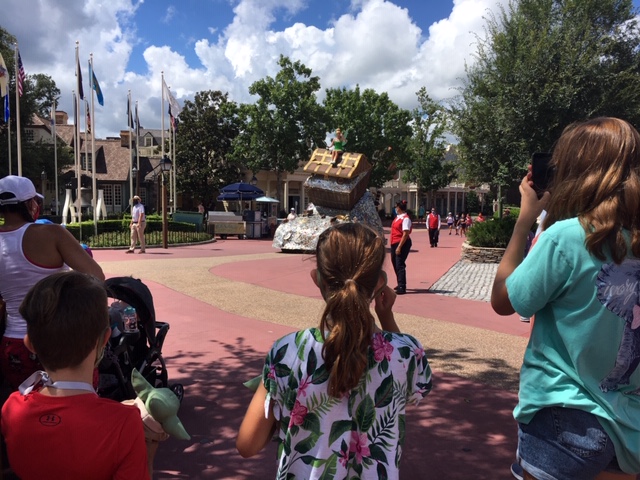 Disney World is very strict about its safety requirements during the pandemic. Masks must be worn at all times, and must remain pulled up. At one point, I saw a woman pull her mask down from her nose and, within a mere 30 seconds, a staff member was politely asking her to pull it back up. Guests are allowed to remove their masks when eating or drinking, which they can only do if they remain seated.

Lines are clearly marked for social distancing, and visitors are regularly reminded not to move to the next line until the party in front of them has done so. The same was true of seats in shows, cars on rides, and lines for popcorn and Mickey Mouse head ice cream treats.

There is sanitizer present to use before getting on a ride and after disembarking, as well as sanitizer visible at a plethora of spots around the park. Rides were periodically stopped, sprayed with sanitizing solution, then run through a rotation to dry before guests were loaded up again.

Guests are still allowed to bring food and drinks into the park. Should you wish to eat at a park restaurant, you’ll be asked to make any food orders through the Disney World mobile app, and to approach the restaurant only once the food is flagged as ready. You still have the ability to order in person, but it is highly discouraged, and the ordering area is kept separate when possible.

There are numerous outdoor seating areas, and, as with ride lines, Disney World’s propensity to air condition the outdoors makes dining outside comfortable enough. Should you wish to sit inside, tables are clearly marked off to ensure proper distancing.

I thought we wouldn’t see Disney World until years from now. Having gone, though, and experiencing how safe we felt, I will tell you that it was just the break from hard reality that my people and I needed during the pandemic. We began the long drive home to Texas with hearts a little bit lighter, smiles a little bit bigger, and maybe a sparkly pair of Mickey ears or two.